The Swashbuachaill has been off on yet another skite to his beloved Spain. He has more than a few dear Spanish friends and has long held the view that they are closer in temperament to the Irish than most other peoples of Europe. For years, his Spanish meanderings were concentrated in the South, most particularly, Andalucia, other than a few trips to Barcelona but more recent visits to the Basque Country, La Rioja and now Asturias and Cantabria have revealed a whole other dimension to the country: the wonderful welcome and hospitality are the same, maybe even better, but the landscape is entirely different; lush, green and an Atlantic coastline that is quite different from that seen on the ‘Costas’ down South. Driving along the Asturian coastline, a body could as easily be in Ireland as in Northern Spain, albeit on the finest Irish summer’s day imaginable. Here’s a link to a recent piece I wrote about my trip for the Irish Examiner. (Do please excuse the sub-editor who decided that Asturias and Cantabria are actually the neighbouring region, Basque or Basque Country!) Naturally, when The Swashbuachaill travels, it is primarily on his belly and while the culinary output of Asturias and Cantabria is not yet hitting quite the same heights as neighbouring Basque Country, in particular, that epicurean epicentre that is San Sebastian (or Donostia, in the native Basque language), the produce is very good and the cuisine rooted in local tradition. The Sidra (cider) is excellent and as popular as wine is in other regions, seafood is readily available, there are some very good cheeses (cows, goats and sheep) and The Swashbuachaill would be more than happy to pass each and every winter seeking comfort in the classic fabada asturiana, simply referred to as fabada, the class of bean stew that would banish any woes, usually consisting of white beans (fables de la Granja, a local runner bean), pork shoulder or bacon, morcilla (the Spanish take on blood or black pudding), chorizo, with saffron being a very common addition, to boot. (Please excuse the quality of the pictures, The Swashbuachaill was sans camera and had to resort to using the camera on his not-quite-as-smart-as-it-likes-to-think-it-is phone.) 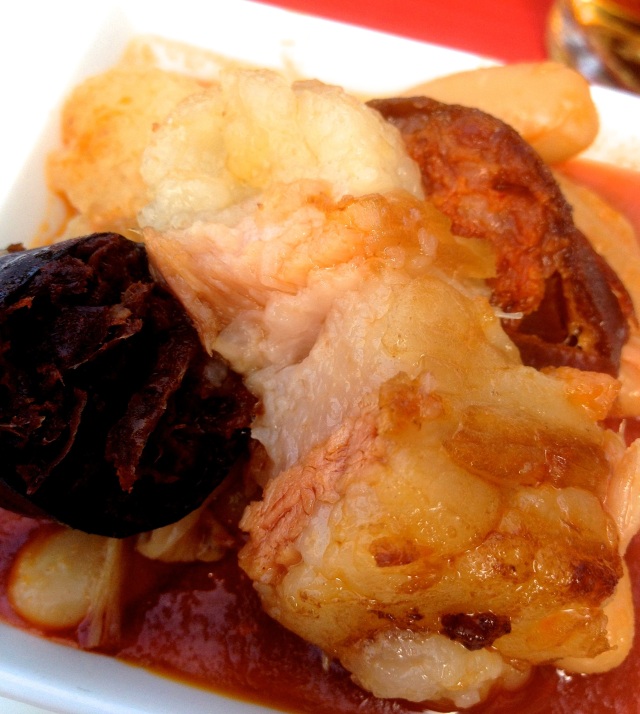