So, The Swashbuachaill is back home again, and contrary to the old saw, the heart is not yet here, still lagging way behind somewhere east of Cork city, loath to leave Dungarvan town. And the spiteful, spitting rain, that sly chill wind without Swashbuachaill Manor only adds to the pain of returning to the real world after yet another glorious spell in the alternative universe that is the Waterford Festival of Food but is often and very appropriately abbreviated to ‘Fungarvan’.

The festival takes place over several days, beginning this year on Thursday April 13th, though the much put-upon Swashbuachaill was afforded a mere 24 hours leave by the Domestic Overlords, arriving at teatime on Saturday evening. But what a 24 hours. 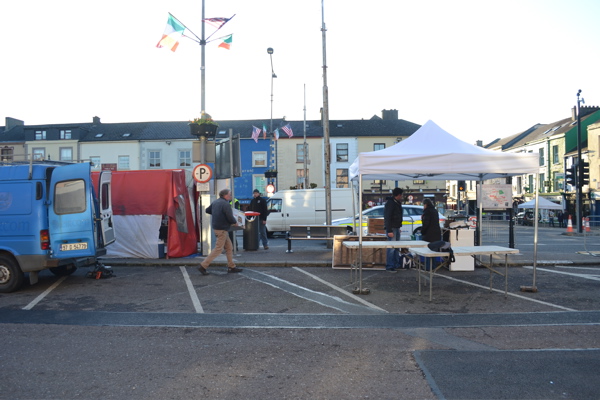 Travelling with yet another highly regarded local ‘culinary Flynn’ — Iain Flynn of Flynn’s Kitchen, supreme champion at the inaugural Blás na hÉireann awards in 2010, The Swashbuachaill’s bloodstream commences a-fizzing at the first tantalising glimpses of Dungarvan Bay as we round the headland.

As we drive through the streets of one of the most pictureseque towns in the country, The Swashbuachaill is suddenly awash with that holiday feeling, the exquisite frisson of first arrival when a vacation stretches out before you like an eternity, the choices appear endless and the choosing is a dithering delight. Though the sun is still shining down on the harbour from a cloudless blue sky, there’s quite a bite from a North-Easterly breeze sweeping down the quays, so a decision is imperative. Naturally The Swashbuachaill opts for a beer. 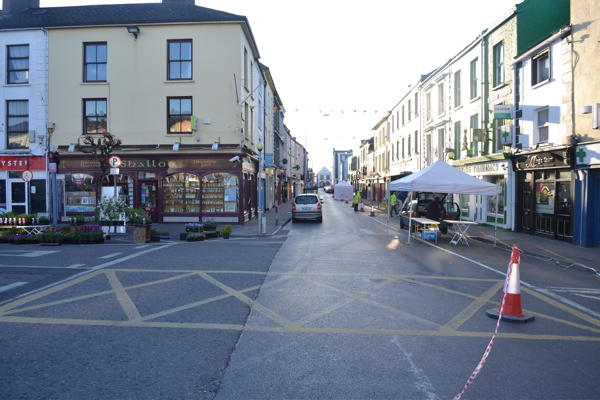 But we’re in Dungarvan so it’s not just any beer but Dungarvan Brewing Company’s Black Rock Stout, enjoyed in Interlude café with Festival Director Therese McDermott, surely the unluckiest woman in town – while we roll in to enjoy the fruits of the labours of her and her fantastic team, she hardly gets a moment to herself, ensuring the wheels remain on all the wagons.

After a hosing down in the corner of the yard and a run through a Lynx shipdip, The Swashbuachaill is ready for his night on the town, specifically, the Waterford County Council Civic Offices for a banquet prepared by the Brewer, The Blogger and The Baker – in other words, three local women, all excelling, nationally and internationally, in the area of food and drink: Claire Dalton, of Dungarvan Brewing Company; Niamh Sheils, London-based and the Observer Food Monthly’s blogger of the year; and culinary force of nature, chef Eunice Power.

There’s a jazz band blowing on the staircase above and the nightlights sparkle up and around the high, open atrium, the dining area marked out by wonderful wood panels — big, black rectangles, a random circular pattern of cuts allowing light to filter through —   created especially for the night by a local artist, also a waiter for the evening. The Swashbuachaill must confess to having forgotten the aforementioned artist’s name (Eamon?) but as Mrs Swashbuachaill will confirm, this brainfreeze is not out of the ordinary.

Shoehorned onto the end of a most friendly and accommodating table, The Swashbuachaill is soon causing great consternation amongst other diners as he gets down on his knees to propose to a large portion of Bacon Jam, a little concoction Blogger Niamh has been working on and possessing all the qualities The Swashbuachaill could desire in his dream life partner – sweet, spicy, savoury and chockful of bacon-y goodness. Eventually the remainder of the BJ is wrestled away from the wailing Swashbuachaill who only recovers his legendary decorum following the administration of some Wild Garlic Soup, creamy, comforting and speckled with crunchy toasted almond flakes. 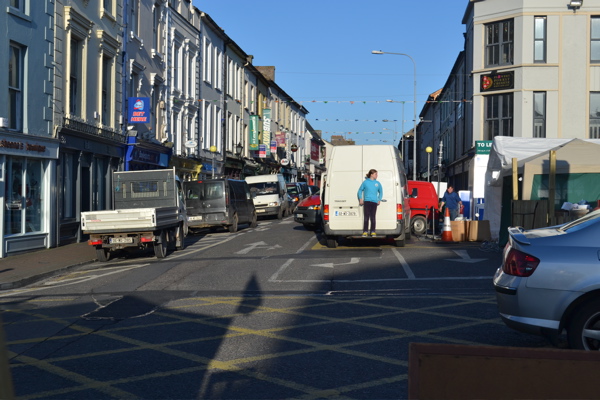 However, a terrine of duck confit with pistachio threatens to upset the apple cart, once more, especially when The Swashbuachaill enjoys a mouthful in tandem with the accompanying brioche and surrounding punters soon learn to eat from a plate on their laps, under the table and far from The Swashbuachaill’s wild and increasingly straying eye. 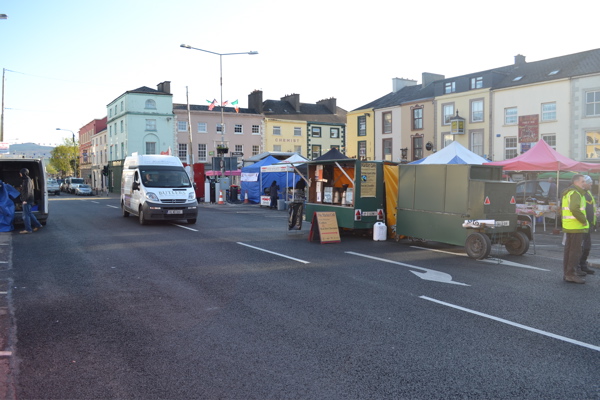 It rather dissolves after that into a blur of rhubarb fool and rosewater meringue before The Swashbuachaill has to be hauled off the cheese table (yes, a cheese ‘table’, none of your miserly ‘boards’ for this crew) and be physically restrained, having propositioned two wheels of Knocklara and one of Anna Leveque’s goat’s cheese logs in a foolhardy attempt to bring them back to his room for a night on the crackers. The quick-thinking Brewer, Claire Dalton, averts a potentially scandalous scene by granting The Swashbuachaill a private audience with the Dungarvan Brewing Company team and after that your chastened scribe skips off delightedly into the night.  All in all, one of the more splendid evenings The Swashbuachaill has put down in many a moon.

After such nocturnal shenanigans, it is yet another tribute to The Swashbuachaill’s enormous stamina that he is up in or around the seven of the a.m. the following day for the traditional (ie this is the second year we’ve done it – ergo, tradition) marketeers’ breakfast: finest-pork-in-the-country Woodside Farm sausages and obscenely large, delicious double-yoker Glenmore Organics eggs, cooked on a pan in Simon Mould’s Volcano pizza oven and served up in a blah from Barron’s bakers.

With the sky a crystalline azure blue, nary a cloud in sight and a healthy nip still in the air, you have all the ingredients for one of the finest breakfasts man, woman or child could ever want for and with the last swallow, The Swashbuachaill is already looking forward to next year’s breakfast. A coffee from Badger and Dodo and he rolls up his sleeves, ready for all comers.

And so begins market day, glorious weather, huge crowds and a buzz that could power the entire country. The Swashbuachaill does his stint behind the stall of Clare O’Brien’s wonderful Gan Gluten but strays far too regularly, in search of new and glorious foodstuffs. What’s more he finds them with Killian and Kate of newbies Kereen Farm, producers of free range pork, purveying some fine sausages, in particular, a lovely spicy ‘Diabhail’ (Devil, for those readers who don’t embrace An Teanga as fervently as  The Swashbuachaill, great patriot an’ all as he is) and some excellent chocolates and truffles from The Truffle Fairy.

With the sun long over the yardarm, Mrs Swashbuachaill rumbles into town in the wagon with a number of The Swashbuachaill’s progeny in tow, the better to soften his heart that she might administer the tranquiliser, lump him into the boot and drive him back home for another year. Which she duly does. And The Swashbuachaill is now back home, pining in the extreme as he ticks the days off the calendar until next year’s festival in ‘Fungarvan’.

A further few pics for your delectation 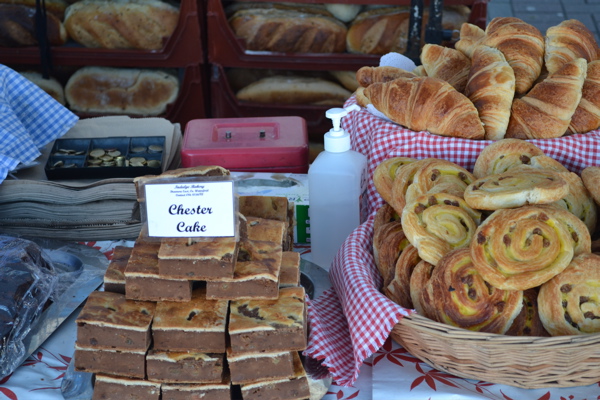 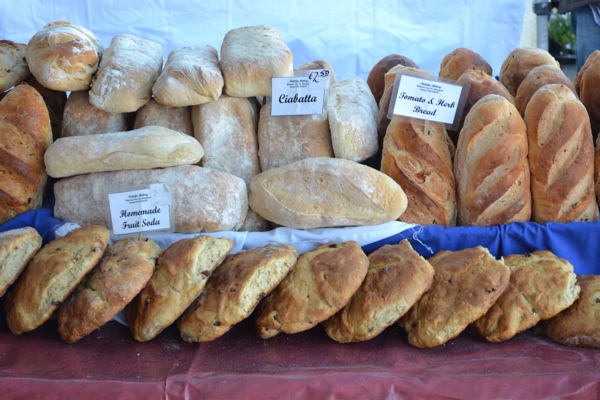 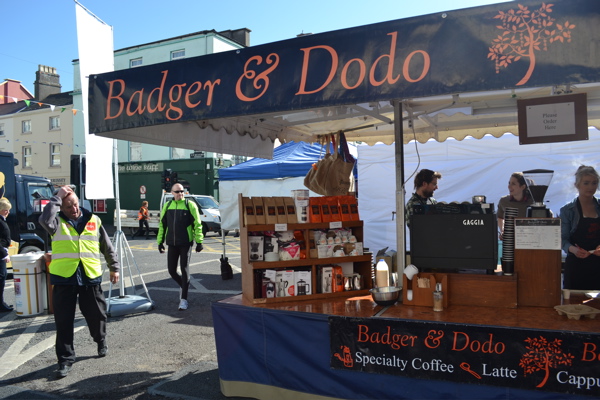 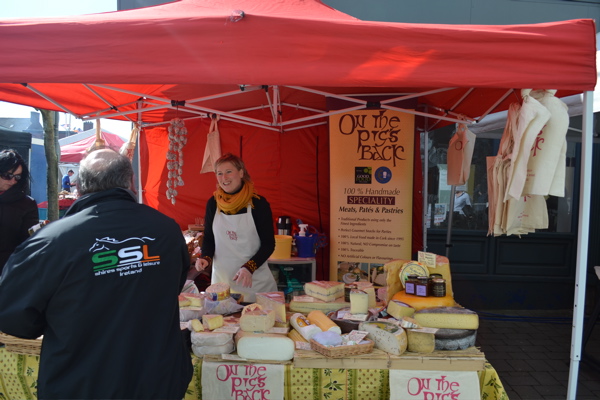 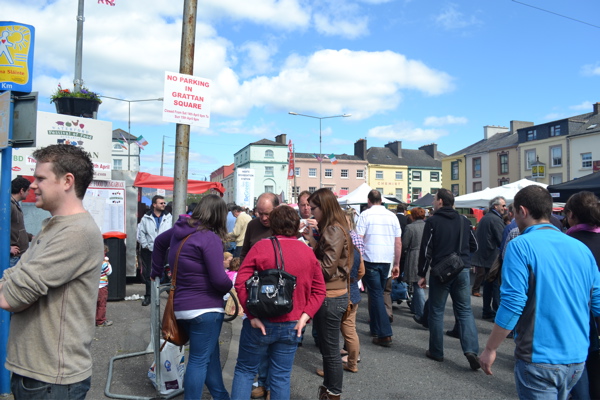