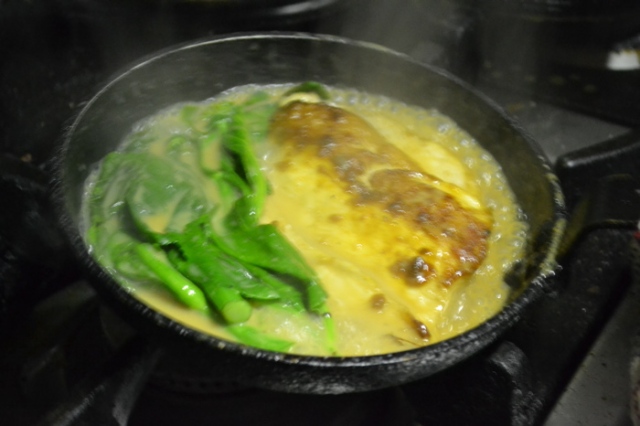 Good food or nothing more than calories?

Haven’t had a chance yet to watch the Frontline programme on the issue on RTÉ last night but hope to see it this evening. Meanwhile, here are some more thoughts on the Calories on Menus issue.

Since this debate about putting calories on menus began, an awful lot of opinion has been flying around the ether. The bulk of it has been most emphatically against the measure being introduced but there has also been opinion from those questioning opposition to the measure. One question in particular was sent directly to me by a person whose expert opinion I rate very highly indeed.

Q. What responsibility should restaurants/cafes/fast food outlets take for informing customers about their food re: calories? Surely customers have a right to know?

I would begin by answering with a question: what responsibility should we, the customers, take for informing ourselves about our food? Other than the very reasonable assumption that the restaurant has taken appropriate steps to ensure I am not going to be poisoned, I disagree with the idea of loading responsibility for my health choices onto any type of outlet retailing cooked food.

Very simply, I believe if you go into a fast food outlet, you are getting shit food, plain and simple. But if you have an appetite for shit food, go ahead, knock yourself out. Certain items on the menu may have less calories than others but it is all still shit food with other health consequences besides the amount of calories contained.

You are, of course, perfectly entitled to ask how many calories are in a dish in any type of restaurant. But other than in those establishments who have voluntarily undertaken, as a unique selling point, to list calories, I doubt very much if even a chef in a Michelin-starred restaurant will be able to give you a precise answer short of sending it off to the lab. However, while you are perfectly entitled to ask, I disagree profoundly that it is your god-given right to expect the exact answer.

The restaurant model has operated for centuries without such information, epidemic obesity is a first-world problem, probably no more than 20 years in existence in Ireland, 50 years elsewhere, at most. (Does anyone remember commenting on how the newly-arrived Eastern European immigrants were so ‘thin’? We Irish who emigrated to London and elswhere in the 80s usually sported a similar trim demeanour — nothing like a surplus of cash to put on a few pounds.)

A good restaurant would honestly confess their ignorance of the precise figure but help you choose an option to suit your dietary requirements, breaking down the ingredients, detailing cooking methods etc. If you were even halfway reasonably informed, you mightn’t need to ask anything at all, just simply go ahead and order.

It’s not restaurants that cause obesity, it’s the lifestyle choices people make.

What makes people get fat, sometimes even obese for reasons other than medical?

In no particular order, off the top of my head and with some repetition and tautology:

A good dietician or ED Therapist could probably tidy up that list in a matter of minutes but I can’t imagine either would have much to quibble with as it is.

What doesn’t make people fat or even obese?

A profound ignorance about the calorific content of each item they choose to stuff between their lips. (Dang! If only I’d known those treble-cheese-whack-me-senseless-dog-burgers contained 4000 calories in each bite, I coulda switched to milkshakes and hot deep-fried apple pie – you got your dairy and fruit going on right there.)

Minister James O’Reilly is a GP and I’m sure as a result of his training has a very sound knowledge of what constitutes a high or low calorie foodstuff yet when he gives himself his daily checkup in the mirror, I’d warrant he’d advise himself to lose a few pounds.

And before I’m deafened by howls of outrage, let me turn the focus on myself and let’s not sugarcoat it other than with a light dusting of spiced vanilla sugar. I am fat. About three stone overweight and counting. It doesn’t make me happy. It makes me self-concious, embarrassed. I joke about it to hide the way I really feel. I like stylish clothes but you wouldn’t know to look at me as I now dress to hide, choosing from the vastly decreased range available to me.

Why am I fat? Well, an aging body, a fraction of the exercise I used to get before getting back into the childrearing game, an inordinate love of all things culinary? And you might also throw in some dysfunctional attitudes to eating related to the above emotional triggers while you’re at it. But one thing is absolutely, stone-cold certain – I am not fat because nobody ever told me about those dang calories.

I was about to write that nobody, bar those at the very lowest tier of our society who have been abandoned, educationally and otherwise, enters a fast food restaurant ingnorant of the health risks of eating there — and as is blindingly obvious, the problems of excessive weight and obesity are not remotely restricted to this section of society.

But I’m afraid I cannot write such a statement because millions around the world enter these establishments every day utterly oblivious to the dangers of the crap they are about to eat. And who are these morons? Why, children, bombarded with hours of advertising before they can even walk who in turn pester parents to bring them. This is where the taste is established for junk food introducing a potentially lifelong bad eating habit. Listing calories means little to those who have yet to learn to read.

I have one older son, now 22, and throughout his childhood, I absolutely refused to buy him any of the crap from McDonalds, Burger King et al. When he asked why, I told him that it was crap and it was bad for him, simple as that. If someone else temporarily entrusted with his care took him there, that was up to them; I never interfered, I simply refused to allow it happen on my watch. Occasionally, I would cave in and buy a McToy but would still refuse to buy him anything to eat. Now 22, he has very naturally run through a couple of years of making his own food decisions which have included the very worst of junk food – that’s probably a rite of passage. But for the most part, his diet now is excellent and, furthermore, he cooks most of it himself. Very well, I might add.

I have no issue whatsoever with the Dept of Health tackling the health problems of obesity with well-thought out preventative strategies – banning all fast food advertising targetted at children would be an excellent start. And, unlike this poorly thought out strategy which to my mind has no real benefits for anyone other than the FSAI (Why do I keep picturing glaziers sneaking around after dark smashing windows?), banning fastfood advertising to children (for a start) would affect no one except the fast food companies and the TV stations. And, after all, the latter appear to have survived the banning of advertising of cigarettes and alcoholic spirits.

28 comments on “Count Me Out – do restaurants owe us a responsibility to list calories on menus?”